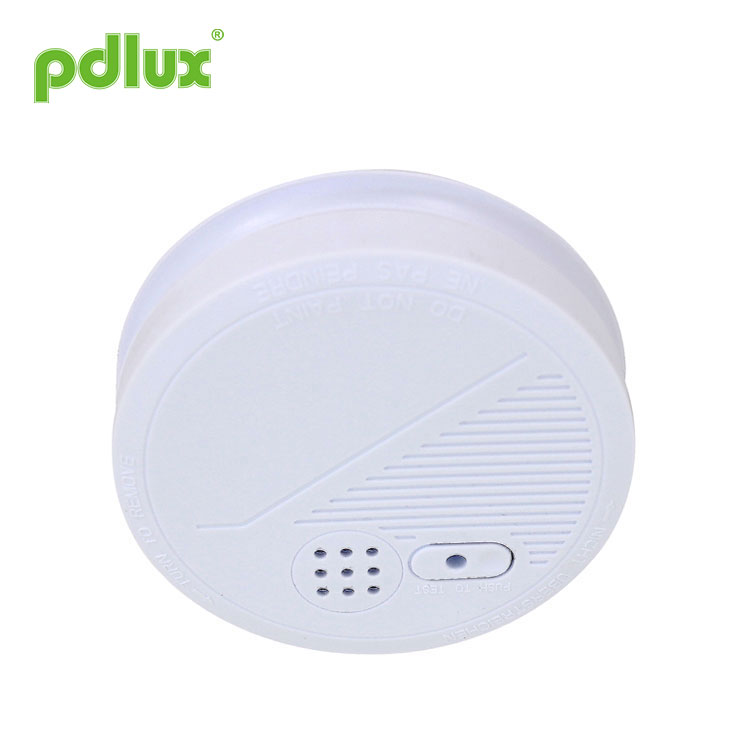 PDLUX PD-SO-729V3.3
In the HUSH function smoke alarm, press the button for 3 seconds, the alarm will beeps and beeps three times, the same sound as the smoke alarm sound.

>Install a smoke detector inside every bedroom.
>Install smoke detectors at both ends of a bedroom hallway if the hallway is more than 40 feet (12 meters) long.
>Install a smoke detector inside every room where one sleeps with the door partly or completely closed, since smoke could be blocked by the closed door and a hallway alarm may not wake up the sleeper if the door is closed.
>Install basement detectors at the bottom of the basement stairwell.
>Install second-floor detectors at the top of the first-to-second floor stairwell.
>Install additional detectors in your living room, dining room, family room, attic, utility and storage rooms.
>Install smoke detectors as close to the center of the ceiling as possible. If this is not practical, put the detector on the ceiling, no closer than 20 inches (50 cm) from any wall or corner, as shown in Figure 3.
>If some of your rooms have sloped, peaked, or gabled ceilings, try to mount detectors 3 feet (0.9 meter) measured horizontally from the highest point of the ceiling as shown in Figure 4.

>Combustion particles are the by-products of something that is burning. Thus, in or near areas where combustion particles are present you do not install the smoke detectors to avoid nuisance alarms, such as kitchens with few windows or poor ventilation, garages where there may be vehicle exhaust, near furnaces, hot water heaters, and space heaters.

>In damp or very humid areas, or near bathrooms with showers. Moisture in humid air can enter the sensing chamber, then turns into droplets upon cooling, which can cause nuisance alarms. Install smoke detectors   at least 10 feet (3 meters) away from bathrooms.

>In very cold or very hot areas, including unheated buildings or outdoor rooms. If the temperature goes above or below the operating range of smoke detector, it will not work properly. The temperature range for your smoke detector is 40 oF to 100 oF (4 oC to 38 oC).

>In very dusty or dirty areas, dirt and dust can build up on the detector’s sensing chamber, to make it overly sensitive. Additionally, dust or dirt can block openings to the sensing chamber and keep the detector from sensing smoke.

>Dead air spaces are often at the top of a peaked roof, or in the corners between ceilings and walls. Dead air may prevent smoke from reaching a detector.

>In insect-infested areas. If insects enter a detector’s sensing chamber, they may cause a nuisance alarm. Where bugs are a problem, get rid of them before putting up a detector.

WARNING: Never remove batteries to stop a nuisance alarm. Open a window or fan the air around the detector to get rid of the smoke. The alarm will turn itself off when the smoke is gone. If nuisance alarms persist, attempt to clean the detector as described in this User’s Manual.

WARNING: Do not stand close to the detector when the alarm is sounding. The alarm is loud in order to wake you in an emergency. Too much exposure to the horn at close range may be harmful to your hearing.

Red indicator
The red LED, as the ALARM indicator, is featured with the detector. It can be seen through the test button   on the cover of the detector. When red LED flashes once 35 seconds, it indicates the detector under normal operation. When smoke detector senses smoke and simultaneously sounds an audible alarm, the red LED will flash very frequently, once 0.5 seconds.

Testing your smoke detector
Test the detector weekly by pushing firmly on the test button with your finger until the horn sounds. Testing method may take up to 20 seconds to sound the alarm horn. These are only ways to be sure that detector   is working correctly. If the detector fails to test properly, have it repaired or replaced immediately.

WARNING: Never use an open flame to test your detector. You may set fire to damage the detector, as   well as your home. The built-in test switch accurately tests all detector functions, as required by  Underwriters’ Laboratories. They are the only correct ways to test the unit.

WARNING:When you are not testing the unit and the alarm horn sounds a loud continuous sound, this means the detector has sensed smoke or combustion particles in the air.Be sure that the alarm horn is a warning of a possible serious situation, which requires your immediate attention.
>The alarm could be caused by a nuisance situation. Cooking smoke or a dusty furnace, sometimes called “friendly fires” can cause the alarm to sound. If this happens, open a window or fan the air to remove the smoke or dust. The alarm will turn off as soon as the air is completely clear.
>If the alarm horn begins to beep once a minute, this signal means that the detector’s battery is weak. Replace new battery immediately. Keep fresh batteries on hand for this purpose.

Taking care of your smoke detector
To keep your detector in good working order, you must test the detector weekly, as referring to section “TESTING YOUR SMOKE DETECTOR”.
>Replace the detector battery once a year or immediately when the low battery “beep” signal sounds once  a minute. The low battery “beep” should last at least 30 days.
NOTE: For replacement battery , use Eveready #522, #1222, #216; Duracell #MN1604; or Gold Peak #1604P, #1604S; or Ultralife U9VL-J.
>Open the cover and vacuum the dust off the detector’s sensing chamber at least once a year. This can    be done when you open the detector to change the battery. Remove battery before cleaning. To clean detector, use soft brush attachment to your vacuum. Carefully remove any dust on detector components, especially on the openings of the sensing chamber. Replace battery after cleaning. Test detector to make sure battery is incorrectly. Check to make sure there are no obstruction inside the test button. If there is    any dust in the test button, insert a toothpick from the back to the front.
>Clean detector cover when it gets dirty. First open the cover and remove battery. Hand-wash cover with cloth dampened with clean water. Dry it with lint-free cloth. Do not get any water on the detector components. Replace the battery, and close cover. Test detector to make sure  that  battery  works  correctly.

●Please confirm with professional installation.
●Please cut off power supply before installation and removal operations.
●Make sure that you have cut off the power for safety purposes.
●Improper operation caused losses, the manufacturer does not undertake any responsibility.

We are committed to promoting the product quality and reliability, however, all the electronic components have certain probabilities to become ineffective, which will cause some troubles.When designing, we have paid attention to redundant designs and adopted safety quota to avoid any troubles.
This instruction, without our permission, should not be copied for any other purposes. 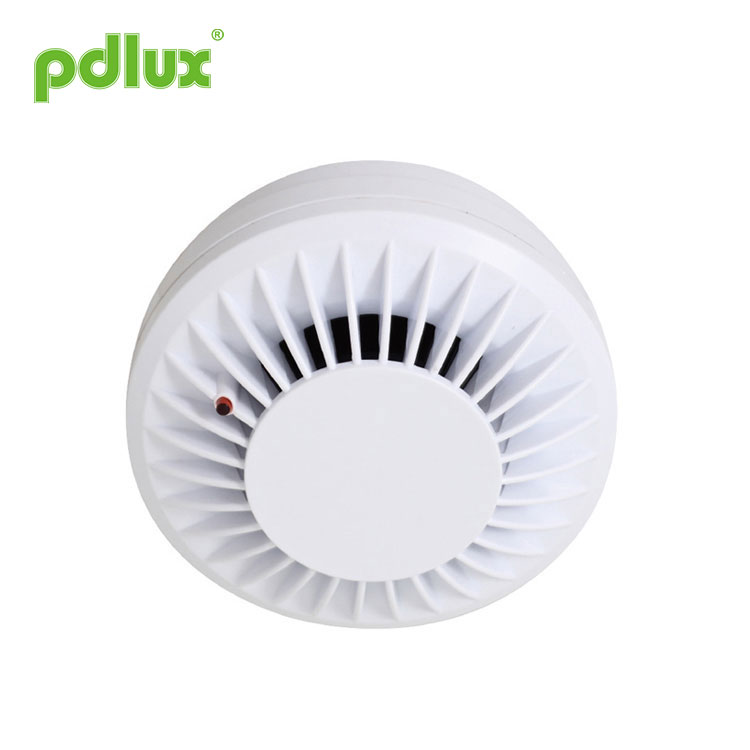 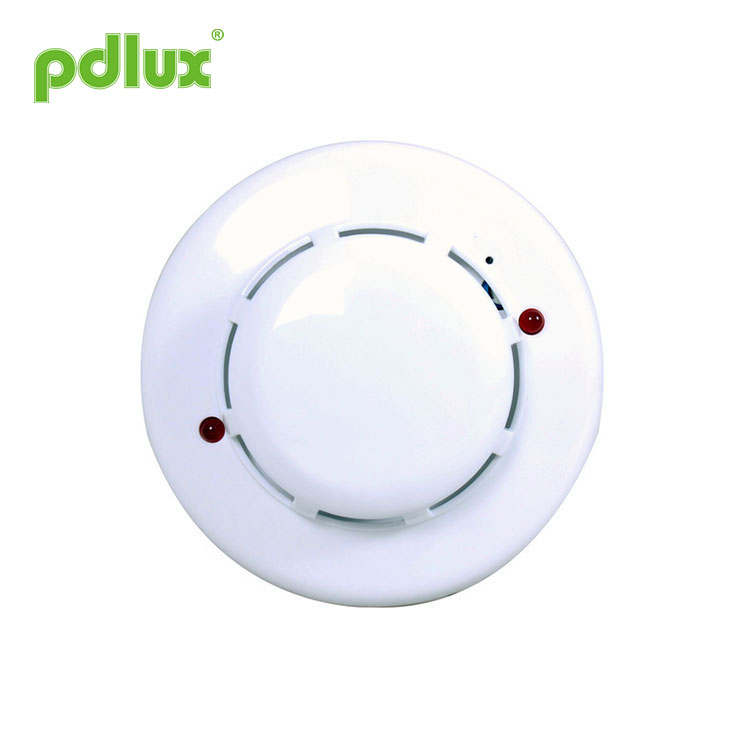